Starting from March 1, 2020 the forum has been switched to the read-only mode. Please head to StackOverflow for support. 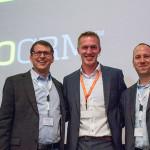 You will be redirected to [title]. Would you like to continue?